CLIMSOFT is a software suite for storing climate data in a secure and flexible manner and for extracting useful information from the data.

What can CLIMSOFT do for me?

The CLIMSOFT system is designed for organisations who wish to store historical climatic data in computerised form. These data can be used to produce summary reports, maps or diagrams; or subsets of the data can be extracted for further processing.

Climsoft is developed according to the recommendations in the WMO Climate Data Management System Specifications.

Climsoft is licensed throughout under the GNU General Public License GPL3 as free open-source software. Formal ownership is held by the Climsoft Steering Committee which includes the Directors of a number of NMHSs which are users. Technical direction is by the Technical Advisory Committee, which is chaired by the Climsoft Coordinator, who is also secretary of the Steering Committee.

How did Climsoft get here?

Climate information is essential for many purposes – disaster risk reduction, food security planning, planning for roads, water supply and sewerage. A well-managed climate database is a national “public good” asset, and this is a key responsibility of the National Meteorological and Hydrological Service of every Country. Managing a climate database takes skilled people working with appropriate computer software and systems, but the skills to specify and build the software are more specialised.

Realising that this was a particular problem for the NMHSs of developing countries, in 1986 a free software package called CLICOM was created. This was widely used, but by 1999 it was obsolete. A meeting at ACMAD explored possible successor packages, and Climsoft was subsequently developed using a Microsoft Access platform. It has been updated since then.

What is the future for Climsoft?

At the WMO Commission for Climatology meeting in May 2018, WMO decided to implement a strategy for development of a free open-source Climate Data Management System and inviting Members of WMO to participate. This “OpenCDMS” is expected to bring together the best techniques from existing CDMS, including Climsoft, MCH (strong in Hydrology) and CliDE (used in Pacific Countries). Being fully open-source software means that the tools and techniques used for quality control and data assurance are open to peer-reviewed scientific study. This will lead to better and more consistent climate data globally. The Climsoft Steering Committee and the developers are fully committed, and expect that at some point in the future Climsoft will be replaced by OpenCDMS, with many more users and developers. However, it is important that the NMHSs of developing countries are fully involved in the development process so their requirements are fully integrated.

Climsoft V3.2 is end-of-life. It has full documentation and help. It requires installation of Microsoft Access.

Climsoft V4.0 is in use in a small number of NMHSs. It is a major rebuild using VB.NET and mySQL, but retaining the V3 data model.

Climsoft V4.1 is being prepared (August/September 2018) for final user testing. Implementation and training in a number of NMHSs will follow. This version implements much improved security in the interactions with the database, as well as full integration with the R-INSTAT package to enable much better useability and climate services.

Future developments may include data model improvements and use  PostgreSQL and Python code.

What can I do for Climsoft?

Climsoft software development is managed through Gihub repositories in the OpenCDMS project.
If you wish to participate in the development, please click on the "Find out more" link above and create a profile on the Moodle website (or sign in if you already have a profile). Under "Climatic Data Management", click on "Climsoft". The course will open, then go to the "Administration" box on the left (you may need to click on the "Administration" tab if the boxes are minimised), then click on "Enrol me in this course". This opens a new dialogue; click on "Enrol me". Your profile is now registered for Climsoft.


You must now submit a Climsoft Contributors Agreement form. To submit the form, go to the Assignment "Climsoft Contributor's Agreement", read the text there, download the form, read it, sign it, scan it and submit the scanned copy through the "Upload a file" link. The Project Coordinator will be informed, and will check it and mark it "OK". Immediately, you will be included in the Contributors Discussion Forum, and the Lead Developers will consider your contributions for inclusion in the core of the Project. 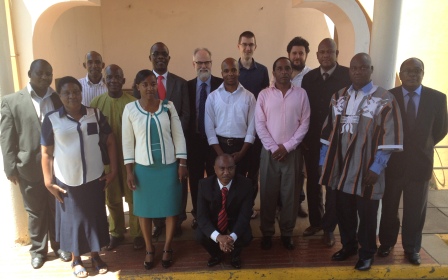